I know it has been 2 weeks since we left PA and everyone is bugging me about my blog. So I finally got a few minutes and thought I would post some info for all of you.
We had some business to finish up in the morning on the 29th and got a late start.We drove into Ohio and met Jeremy for Supper. He wanted to meet at this truckstop where he said the food and service were great. Well the food was good but the service sucked. LOL We rented a cabin for the night and got a good nights sleep. Left early in the morning to go to Lehman's. They have a beautiful store and they are very friendly folks. Then we drove to my aunt Shelia's cabin in Indiana by way of Kentucky. We had to go thru Louisville and there was and accident that had us sitting in traffic for a couple of hours. Not fun with all the humidity.
We had a very nice time with Shelia and Charlie, and my cousins Krystal and Jenny were there visiting as well. Loved spending time with the family but it was time to head on down the road. We went thru St. Louis and more traffic. One of the Bridges across the Mississippi was closed and there was an accident on the other one so all the traffic was on one bridge. While we were waiting these planes were flying around. If you look close you can see on one pass the propellers are vertical and the other they are horizontal. 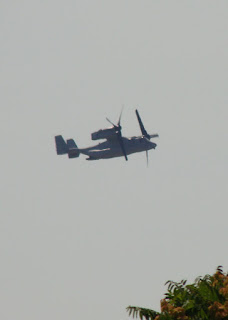 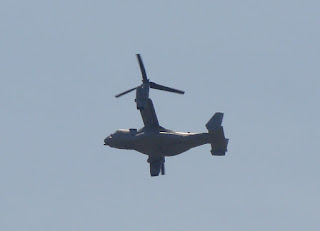 We went by the Arch and also Busch Stadium. 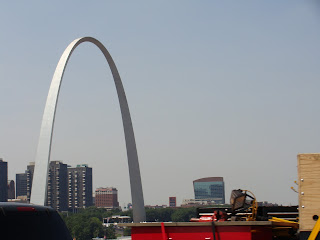 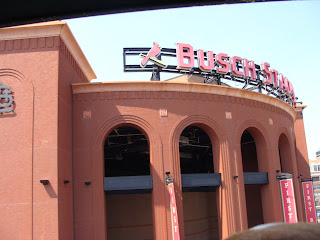 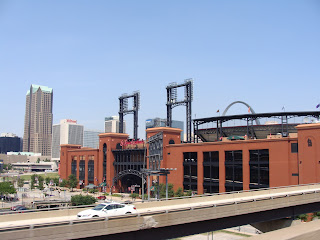 From there on we just wanted to get there and the miles seemed to be going by so slow.
We had to take a detour in Iowa because of the flooding. We were on a road that was close enough to see the flooding and the road itself was sandbagged. Miles of farmland and houses flooded as far as the eye can see. Whole towns were blocked off by 6 foot high berms of dirt  and the one town we went thru had the dirt piled along the road ready to close the road when the water reached them. I felt really bad for those folks. We did stop for gas at one of the towns and I must tell you that every one was very in very good spirits for all that was going on around them. I am not sure I could keep my smile knowing my hard work was all covered by flood waters. They are very strong stock for sure.
We drove on thru South Dakota and stayed in the Badlands at a KOA for the night. Of course it stormed like crazy. Poor spot had nowhere to hide. We gave him a dose of Benyadryl and he slept in the truck. We left early in the morning and drove thru to Fort Benton. Stopped at Wall Drug for gas and while I was walking the dogs, Jet saw his first buffalo. It was a life sized fiberglass buffalo and he was barking and growling and wouldn't go close to it. We provided some entertainment for the customers at the gas station to be sure. LOL
We drove straight to Fort Benton and stayed at the campground in town. Of course it was Sunday and nothing was open and the next day was the 4th so again nothing was open. We took a trip to Great Falls on Monday and ordered all of the appliances. The timing was perfect for Home Depot's appliance sale and we saved about 40% overall. Got a GPS so we can find our way around in Great Falls. Lots of places to go there and it is 37 miles from us. Takes about as long to go there as it did to Selinsgrove because there are no towns on the way and the speed limit is 70. :)
I will update some more in the next few days, now I need to get back to work.
Posted by Beth and Mike Ettinger at Thursday, July 14, 2011