Been a while since I have posted anything on here and so much has happened.

We have basically closed the butcher shop. Business had been slow and the price of beef up. So.....

Mike, Michael and Jed have started a construction business. They are keeping busy and are getting a reputation of hard workers. Mike helped a friend get his tire business started and has been working there for a few weeks.

Around the same time, we found a place that would work for a bakery. Signed the lease and got to work. We have renovated a small shop that is on a side street between front street and main street into a bakery. We ripped out the flooring and installed vinyl, covered the walls with plas- tex, bought a convection oven and cooler, put in a display case and 2 sinks, and converted a small back room into a storage room. We are getting inspected and licensed on Tuesday, and hopefully Benton Breads & More will be open on Wednesday.

On the personal level:
The school year is finished here and it ended with a bang. The next to the last week of school, Mikey and Michael went on the 5th grade canoe trip. They spent 2 days on the Marias River with the whole 5th grade class. Had a lot of fun and learned a lot.

On Friday, the school gave away their Bikes for Books bikes and Mikey won one. They get a chance entered for every book they read and the Masons donate the bikes.

That weekend was the fishing derby here in town. Mikey caught a big carp the first day and the adults caught some other fish. 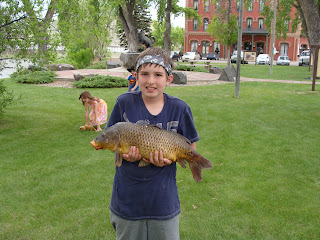 On Sunday, Mikey caught a drum and a gold-eye and Kenna caught a little drum. (more on that in a min.) 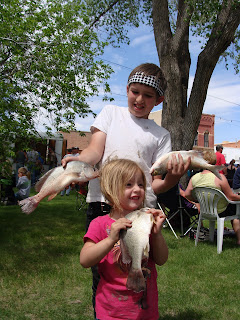 Tara caught a 10 lb catfish and since it is a game fish, she pretty much cleaned up in the prize department. She won a gun, a tent, a grill, a huge tackle box, and a bunch of cash and gift certificates. 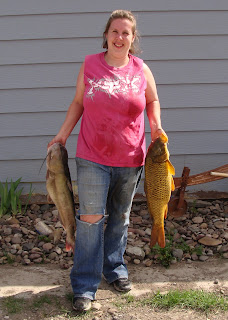 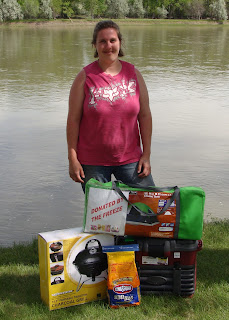 Mikey also won another bike, but it was too small for him so we had to take it back and exchange it for a bigger bike. 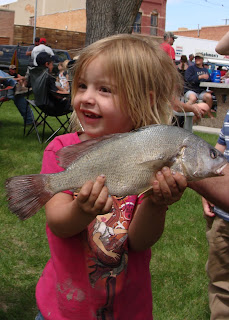 This is Kenna's fish from Sunday and whenever anybody asked her if she caught a fish. She would say "Yeah, and it was this big." The funny part was every time she told someone it got bigger and bigger. True fisherman!!!!