In this process you discover how to break your “needs” into what is truly “need” and what is “comfort.”  Then you meet the needs and evaluate which of the comfort is most important.

Our needs were shelter, water, heat, lights, and a means to cook. Pretty basic needs at this point.
We were able to completely strip one of the trailers that had an addition on it and although it isn’t structurally very good, it was good enough. The issue was the animals that had decided to call it home. We removed all the old furniture and ripped up all the carpet, all 5 layers!!! We cleaned out all the cupboards and drawers. Cleaned, scrubbed, sprayed with bleach, cleaned again and lined with vinyl. We cleaned a stove that was there also. It was a terrible job, but 5 cans of oven cleaner later it looked like new.  We then bought enough 5/8 OSB board to cover the floors. Shelter and a means to cook: check! 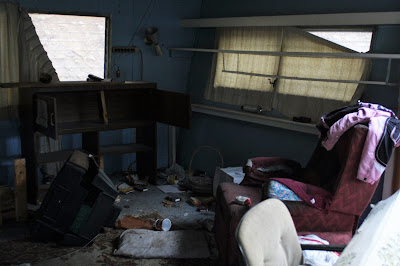 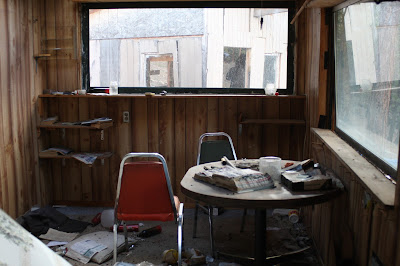 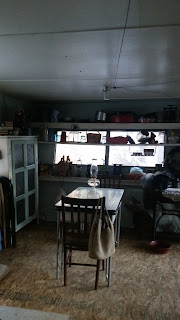 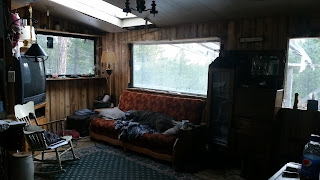 Water was a necessity for washing, cooking and drinking. We bought water to drink and cook with but buying water to wash with was a little out of our budget. So we hauled water from town in 5 gal containers. We got very good at conserving water in this process. On a whim, I had bought a crock with a spout a few months before we moved. That crock sat on a little stool by the kitchen sink and that was our “running water.”  It worked to wash dishes and our hands.  Water, check! 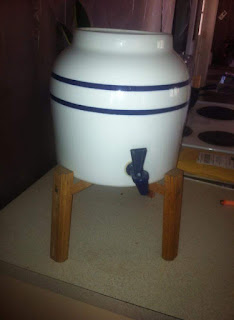 Keeping warm in a 1950’s trailer in the mountains in Montana was going to be a challenge.  Especially with no wood-stove in the place.  We raided one of the other trailers on the property and moved a wood-stove up.  There had been a stove here so there was a stove pipe of sorts thru the roof but the safety of that set up was very questionable. And the stove was close to the wall. A 60 year old wall made of wood. We bought some cement board and put it on the floor and wall as an insulator. We also bought a section of triple wall pipe to go through the roof. It isn’t pretty but it works. To feed the stove would take a couple of cords of wood for the winter.  We were behind on this, very behind. But there was a lot of downed trees and standing dead trees and Mike worked every weekend cutting wood to keep ahead of it.  Heat, check! 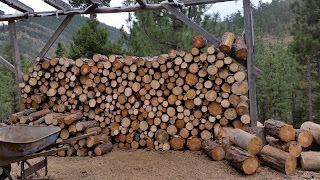 The winter nights in Montana are very long. 4 PM to 8 AM long. That meant that during the week we were only home in the dark. So lighting was very important. Initially we had battery lights and a solar outside light that would charge during the day and would light up our house at night. We also needed a way to charge cell phones and such and have a battery pack that I would charge at work for that need. We researched what we needed and bought 2 solar panels, a charge controller, 2 golf cart batteries and we had an invertor. Mike built a temporary stand for the panels and we hooked it up. We had enough power to do what we needed but none extra.  We were able to get 20 led automotive lights and sockets from Amazon and we bought a spool of automotive wire and switches. My mechanic ran lights from the batteries and we had lights that operated on switches. We dismantled a candle holder that fit just right into wide mouth canning jar lids. So we covered the lights with jars. Lights, Check! 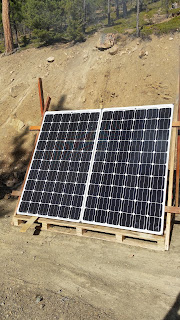 Our needs were met but there are some things that are needed to make life bearable. SHOWERS!!! We could bathe in a bucket but that wasn’t the best option. So we bought a rechargeable camping shower. This is the shower we use
It recharges in about an hour and one charge will do about 10 showers. We heated the water on the stove in a big coffee boiler and filled a 5 gal. bucket. Then we showered with that. Yes, you can shower and wash your hair in just 5 gallons. Wish I had known about these at church camp when I was a teenager!

One of the other things that we needed was a way to keep cold food cold. We didn’t have enough power for a refrigerator or a freezer. So coolers it was. We kept things like eggs, butter and cheese in a cooler and used powdered milk. We later set our freezer outside and it keeps things cool during the day and we prop the door open at night to cool it down.

Most of our winter that wasn’t spent cutting wood was spent making plans. We planned out our house, barn, and greenhouse and how to get the property cleaned up. I like to be as efficient as possible when working on big projects so we had to have a plan. It would really suck to put up a barn and realize that you would rather have your house there.  We also tracked where the sunlight hit at different stages in the winter and what trees blocked the sunlight in otherwise perfect areas. While we have actual daylight for 8 hours in the winter, because of our location in the mountains, the sunlight doesn’t shine everywhere the same.  Because of this, placement of buildings and removing the right trees are very important. So planning it is.

We were able to set ourselves up to live comfortably this winter and accomplish what we needed to survive. And we did a little better then that. More to come.....
Posted by Beth and Mike Ettinger at Monday, April 25, 2016 No comments:

I've been contemplating starting a new blog. Been working on several different ways to go about it. Then I come back to here and say just work with what you got.
So I will be working on changing some stuff over the next few weeks and making my blog more active.
We have done a lot of work and had a lot of experiences over the last few months. So I will go month by month to catch you all up.

But first: We talked a little bit about the property we bought. I debated a lot on if I wanted to put pictures up before it was done or just the before and afters. Well I am going to show you what we started with and you can follow along with us on our journey.

Let me warn you that these pictures are of land that has been neglected for many years. Most of our woods looked like this. 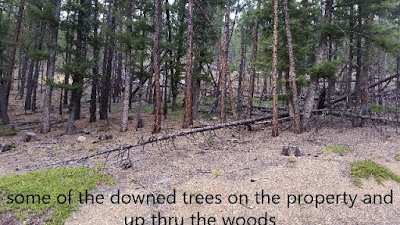 We had a lot of stuff to clean up. The whole property needed to be raked and was covered with 6-8 inches of pine needles that had accumulated over stuff (car parts, trash, broken glass) and was like a mat. We are still working on that. 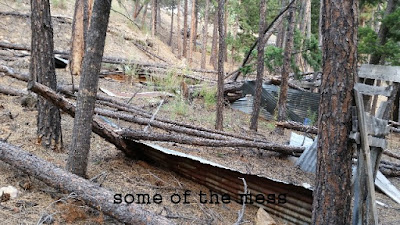 There was stuff everywhere. There were also some "buildings" on the property. They were either trailers that were in very poor condition or they were a log frame with tarps and tin stretched over them. They were falling apart and some had fallen into a heap. 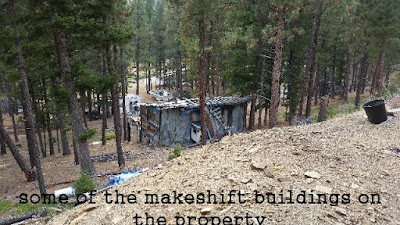 There was one trailer with an addition that we fixed up to live in temporarily. 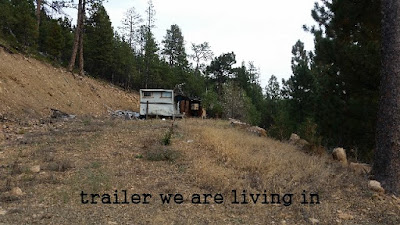 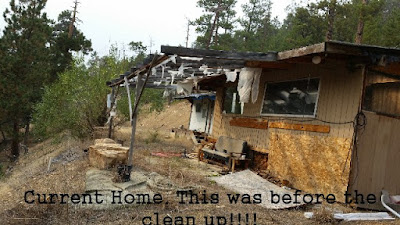 We did a lot of work to it to even be able to live here temporarily. But it does have its benefits. 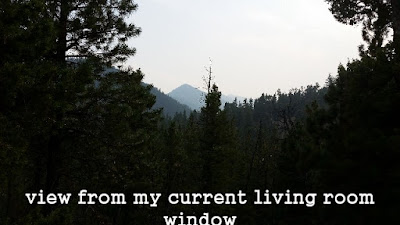 There is also another landing that is higher then this place. 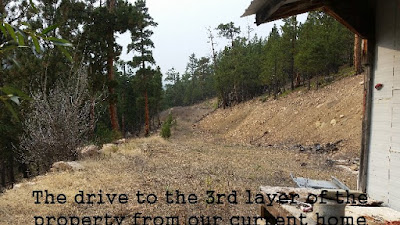 The place that we decided to put our house was occupied by 3 single wide trailers that were together under a roof to make one house. The roof leaked and everything was rat infested so they just need to go. 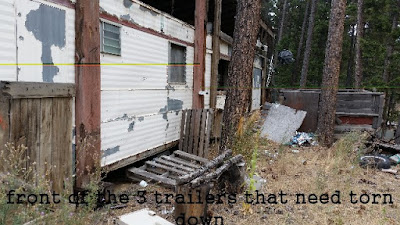 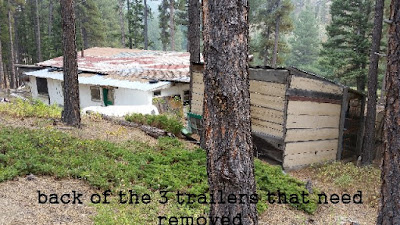 The view from our house location is great and will be better when we get everything cleaned up out front and some trees taken down that need to come down. 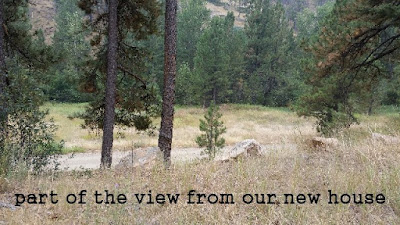 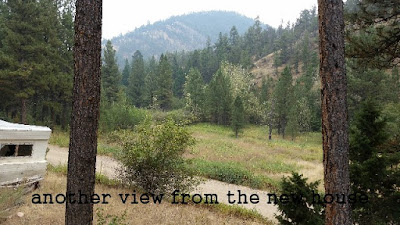 Yes, this is a lot of work. Yes, we may be crazy. A lot of work has already happened and it looks a lot different now. They jury is still out on the extent of our craziness.

Our plan is to have a house to live in, a real barn and a shop for Mike before fall. I'll keep posting our progress as we go.