So you have probably all seen our show on Discovery. We have dealt with a lot of emotions this week regarding the show and the after math. We have had old friends that were really concerned that we were starving and that thought that we were on the verge of breaking up.  They thought that I had transformed into some crazy woman and poor Mike couldn’t do anything to make me happy.  We even got a letter from a well meaning , although a little crazy, homeless woman that wanted to come live with us and teach us all she knew about gardening.

We have been told that we are pathetic, live in a rat trap, and are failures or will fail. People feel sorry for Mike cause I am not happy with anything and we fight all the time. None of this is the truth. We are happy and do not fight. We are living the life we want to live and building our home, not just a house, together. We are not failures in anything and will not fail.

The show was able to portray me that way because they are the ones that made me mad. They flat out lied about a lot of things and wanted me to lie. Well I don’t lie and when you make me mad, I don’t hide it either. They also thought they were going to make me do some things that I wasn’t going to do. Like bring my goats here when we didn’t even have feed bowls for them or feed or even a water bucket. I fought for my animals because no animal deserves to be treated that way.  They also would not put anything in place to make it easier to accomplish our future goals. Kept telling me that I make too many plans and dream too big. Tried to convince me to not make any plans just make it through today. That is a recipe for failure if I ever saw one.

Mike doesn’t like confrontation and wouldn’t give them any, he just sent them to me. That is the way we work.  Kind of better that way because it would have been a whole different kind of show had his temper flared up.

It didn’t really bother me too much. Kind of just dealt with things and moved on. Then Friday night happened. We don’t have cable or satellite so I didn’t get to watch the show.  I saw some comments before I went to bed and then when I got up in the morning. I was shocked and appalled at what this has turned into. I guess it didn’t push my buttons when it was me but when it was someone else, well…

I had exercised extreme restraint in the past week, for the most part, but this pushed some buttons for me. The couple on Friday nights show were shown like they abused their animals. People were saying things like the ASPCA should have been called. Their friends and people who knew them were defending them  and posting links to their farm website and facebook pages that showed what their life was really like.  The fact that they were misrepresented even worse then we were really made me mad. I felt so bad for them.

So I went back to social media and started responding to people that believe everything they see on TV.  Had some good conversations and cleared some things up. Most people were seeing through the editing but things didn’t make sense to them.

So you may ask, why did we do this show. Well at first it was presented that they wanted to show people what it was like to live off grid. How hard it was and what it was really like. They talked about putting in a well, a house, barn stuff we needed. When you look at all we had to do, just bringing in an excavator for a couple of days is a huge help. So that is why we did it, not that we “needed” the help but because it would have given us a leg up.

There are things that we are not supposed to talk about and reveal to the public but people deserve to know that some things are not as they seem.  Later I will do a post that has all the down and dirty details on what not to do. If discovery wants to do a show about living off grid and actually inform some people then they should actually listen to people who live it and show the why behind some of the stuff not the drama. I feel really sorry for folks that watch this and think that some of these things work.

But we don’t work all the time. We have fun too. Last weekend we went fishing with some friends. So this is how my hubby spent father’s day. Fishing in the Missouri river. 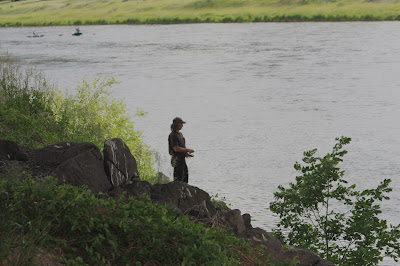