You win some, you lose some.

We had our first kids born here this week. Beautiful babies. Mike had to help with the delivery a little, but every thing ended up fine. First time mama is doing very well. 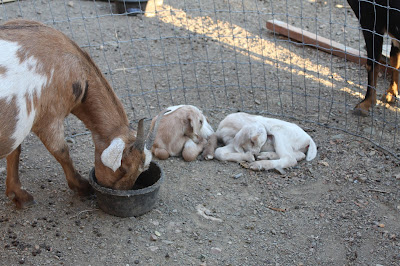 We have always taken the kids immediately after they were born. We milked and this would allow us to milk and get the kids away early. However our barn isn’t finished and the goat that delivered first is a mini so hand milking is very difficult. She does have a nice bag and looks to be a good producer but very difficult to milk with such tiny nipples. So we have left the kids with her. She will let us milk her but we are allowing the kids to drink as well. Not entirely sure how that will work out, but we will see.

Because the  barn isn’t done the goats are also not in a fence. The goats are out at night because of the bear activity. I don’t want a bear to get into the pen and they have no where to go. They freely raom the property and keep the weeds under control.  But we were a little concerned with coyotes and bears after the kids.  Our neighbor on our back line lost 3 lambs a couple of weeks ago and we didn’t want that to happen here. So we brought up a dog pen and stuck it up by the house with mama and babies in it for the first night. They did well and after that she didn’t keep them in there and instead buts them in the crawl space under the house. The other goats all stay close and keep guard.
One thing that we have noticed is how much goats act like deer. Mama will take the kids somewhere and put them down to nap, then wander off to graze. Then she comes back to get them, much like a deer does with a fawn. Of course a fawn doesn’t have a dog keeping an eye on them like these kids do. Our cockapoo , Reese, thinks that he has to watch them if mom isn’t near, and of course they get plenty of attention from the girls. 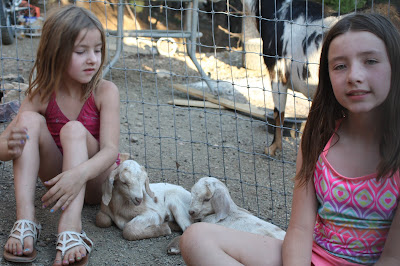 A few weeks ago we traded our buck and a bred boar doe for a doe in milk. When we looked at her she was healthy and happy. When they brought her a week later, she was very ill and appeared starving. We spent a week nursing her back to health. Finally got her healthy and was able to get some milk from her. She was the goat that didn’t know she was a goat and she always wanted in the house and wouldn’t run with the other goats. She was finally starting to make friends and would go to the meadow with them and we were hopeful that she would be fine. 2 nights ago we were awakened by a goat screaming outside the living room window. She was on the ground in obvious distress. All the signs were anaphylactic shock. We have no idea what actually happened to put her in that condition. No sign of injury or illness.  I know that we should have epinephrine on hand, and we always did when we had goats before, but every trip to the store I’ve forgotten it. So my negligence led to us losing our first goat here.  I believe that her body and organs were damaged from the state she was in when she came here and despite our efforts to get her healthy again, it was too much for her. We have no idea how old she was but from experience, I would guess at least 5 years maybe more. I do know that whatever happened to her before, but she was happy, cared for and loved the last few weeks of her life. 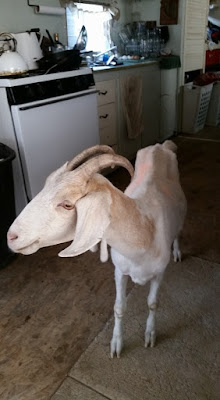 Everything doesn’t go as planned all of the time but you learn from it and go on.  You accept the good with the bad. This life isn’t all good and wonderful. Some parts are very tough to deal with, but it is all worth it.