I’ve tried to explain our process for rendering lard to people and never feel like I do a good job. So when we rendered a pile of lard that we got from a friend that had a pig butchered, I took some pictures of our process. 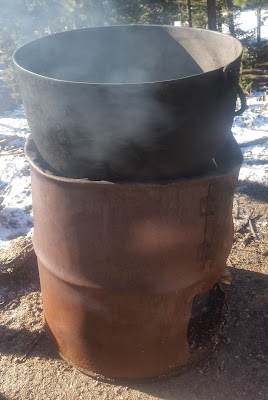 We have a 45 qt cast iron kettle that we put on a cut off 55 gal drum that Mike cut into a base for the fire. 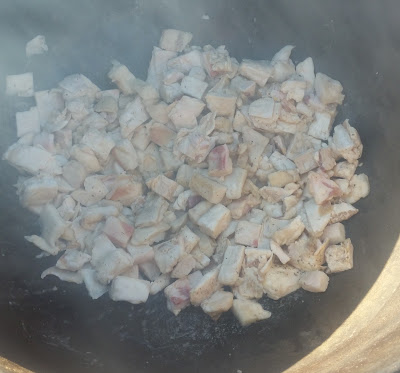 We cut the lard into chunks and add a little bit, about a cup or so, of water in the bottom of the kettle. We cook the lard until all the chunks are soft and starting to float. 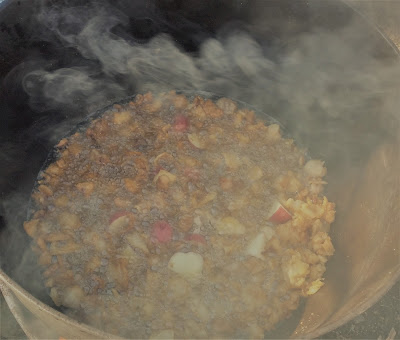 Then we add in a few pounds of potatoes cut into chunks. The potatoes serve two purposes. They help to pull impurities out of the lard and make it white. They also make a great snack. 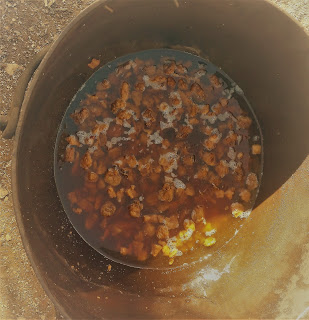 We continue to cook the lard, stirring almost continually. When the potatoes are golden and the cracklins are also golden and floating we remove it from the heat and scoop it into the lard press. 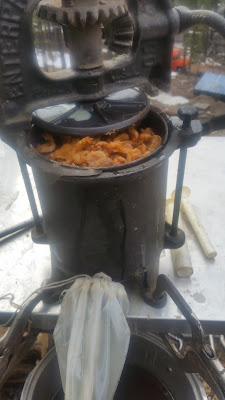 The lard press is an old family friend.

For those who haven’t seen one before, I’ll explain a little on how they work. There is a grid in the bottom of the press that fits inside a metal sleeve that is perforated. This holds the chunks inside the press and allows the lard to flow out the bottom. We put a wine filter bag over the spout as well. We spoon everything into the press and wind the plate down to press all the lard out of the cracklins. 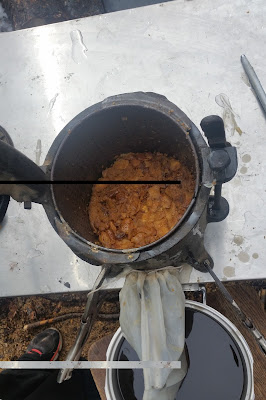 So what are cracklins? They are simply the flesh that holds the lard. When cooked, pressed and salted they make a great snack and some people grind them and put them into cornbread. 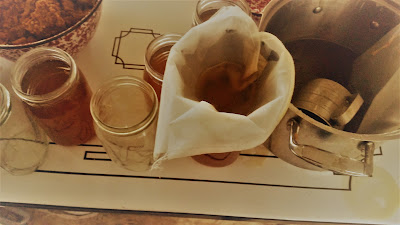 When the lard and cracklins are all pressed and the lard is in a pan we then filter again through a wine filter bag into jars. If it is hot enough we just top with lids and they seal. If not hot enough we water bath them for 10 min to seal them.
We use lard for deep frying, just about every frying we do, pie crusts, and biscuits. 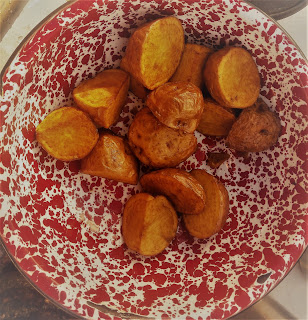 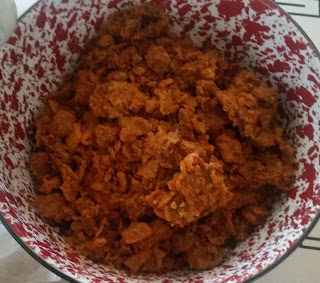 We eat the potatoes and cracklins get put into a container after they are cooled and kept for a snack.
Some people render lard in a roaster or a slow cooker. Ive done it in a roaster in the oven but this is so much quicker and we have better results. The whole process today took less then an hour.
If you have never had French fries deep fried in pure lard you are missing out.
Enjoy!

Posted by Beth and Mike Ettinger at Tuesday, February 21, 2017